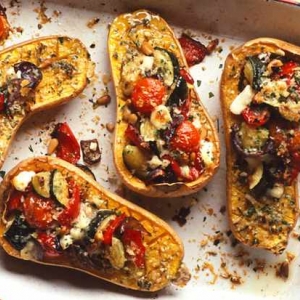 Health Benefits: This versatile veggie is packed with more than just taste possibilities; it's also loaded with vitamin A, is a good source of fibre, potassium, and magnesium. And like most vegetables it's fat, cholesterol and sodium free.

Sprinkle halved squash with olive oil, season with salt and pepper and bake for 25 minutes in the oven at 200°C, until fork-tender.
While the squash bakes, prepare the filling. Cut cheese into cubes. Remove pomegranate seeds from fruit, chop walnuts roughly, half tomatoes, roughly grate zucchini, and pick thyme leaves from the stem. Mix everything together in a large bowl until combined.
Remove squash from the oven, fill, and bake for 10 minutes, until cheese is melted.