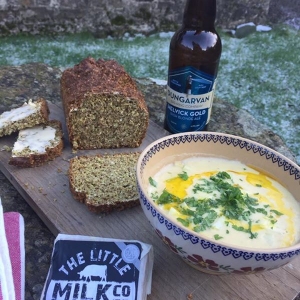 Melt the butter in a large saucepan over a medium heat.  Add the onions and potato and cook gently, stirring from time to time, until softened (but don’t let them take on any colour) – around 10-15 mins.

Sprinkle the flour evenly over the vegetables in the pan and cook, stirring for 1-2 mins, then stir in the chicken stock.  Whack up the heat and bring to the boil, then reduce to a simmer and cook gently for about 10 minutes until the soup has thickened.  Pour in the ale and heat gently for a further few minutes.

Remove from the heat, let cool slightly and then blend with a blender.  Add the cream and whiz until nice and smooth.

Pass soup through a fine sieve into a clean saucepan and season with pepper and not too much salt as the cheese will introduce a saltiness later.

To make the dressing, whisk together the olive oil, maple syrup and cider vinegar in a small bowl until emulsified.

Warm the soup over a gentle heat and stir in the grated cheddar, allowing it to melt. Taste and adjust seasoning if necessary.

Ladle the soup into warmed bowls and trickle a little dressing on top of each one.  Sprinkle on the diced apple and chives and serve immediately.