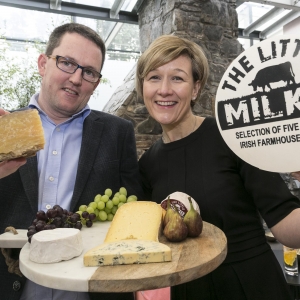 7th March 2017:  The passing down of recipes and traditional farming and production methods from generation to generation has been instrumental in helping Ireland’s food legacy to endure, according to Aoife Carrigy, Chairperson of the Irish Food Writers’ Guild (IFWG). “The positive influence that previous generations have had on today’s Irish food sector is remarkable, and emerged as a common defining characteristic of the winners of this year’s IFWG Food Awards,” said Aoife, who was speaking at the 2017 awards ceremony in Dublin.

Six IFWG award winners were announced together with the Guild’s first posthumous award, which honoured a pioneer of the Irish craft beer revolution, the late Oliver Hughes.

Since 1993, the IFWG Food Awards have celebrated Ireland’s food producers and organisations. They recognise those great Irish producers and products that are integral to Ireland’s fine reputation in food and drink, both at home and abroad.

Aoife Carrigy said, “This year’s award winners are representative of so much that is great about the food and drink industry in Ireland. Our winners have created sustainable family businesses, continued and built upon the work of their forefathers or collaborated with like-minded people to create products of an exceptional standard.

“The common thread that binds the 2017 winners is their mutual respect for tradition, yet this group of dynamic people is also united by their forward-thinking approach. They have each been chosen because of the innovative approach they take to their craft as well as the distinguishing quality of their produce and their continued dedication to Irish food.”

The awards were hosted at the two-Michelin-star Restaurant Patrick Guilbaud, marked with a lunch devised and prepared by chef and co-owner Guillaume Lebrun, who incorporated the products of each winner into a celebratory menu. Aoife Carrigy thanked Bord Bia on behalf of the Guild for its support of the awards and its tireless work on the home and export markets to promote and develop the Irish food industry.

The IFWG Food Awards were one of the first of its kind in the country and remain unique. No one can enter themselves or their product into the awards and no company knows it has been nominated or shortlisted for an award. The Guild is the sole nominating and decision-making body.

The Little Milk Company is an innovative co-operative demonstrating that environmentally responsible small producers can thrive by working together.

In 2008, ten organic dairy farmers from Munster and Leinster formed a discussion group chaired by Pat Mulrooney to consider the sustainability of their family farms. Recognising that economic sustainability lay in adding value to their primary product, the group experimented in 2011 with a raw milk Cheddar produced for them by Knockanore Irish Farmhouse Cheese. Encouraged by positive feedback, each of the farmers invested in the company the following year. In 2013, they brought Conor Mulhall on board as a full-time CEO of the Little Milk Company.

Today they produce eight different cheeses, including three styles of Cheddar, an organic Brie, an organic blue and Brewer’s Gold, a washed-rind cheese that uses Dungarvan Brewing Company’s Copper Coast beer. Their cheeses are exported to 16 countries and use 70% of all the milk produced on their ten family farms. With this projected to rise to 100% by 2018, the company is recruiting local farmers to convert to organic production in order to meet their future demand. By collaborating with local cheese-makers, they are supporting small Irish craft food producers while securing a future for themselves and their families on their own farms. www.thelittlemilkcompany.ie